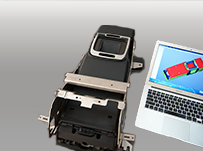 Rapid prototyping is a group of techniques used to quickly fabricate a scale model of a physical part or assembly using three-dimensional computer aided design (CAD) data.Construction of the part or assembly is usually done using 3D printing or "additive layer manufacturing" technology.

The first methods for rapid prototyping became available in the late 1980s and were used to produce models and prototype parts. Today, they are used for a wide range of applications[4] and are used to manufacture production-quality parts in relatively small numbers if desired without the typical unfavorable short-run economics. This economy has encouraged online service bureaus. Historical surveys of RP technology[2] start with discussions of simulacra production techniques used by 19th-century sculptors. Some modern sculptors use the progeny technology to produce exhibitions.[5] The ability to reproduce designs from a dataset has given rise to issues of rights, as it is now possible to interpolate volumetric data from one-dimensional images.

As with CNC subtractive methods, the computer-aided-design - computer-aided manufacturing CAD-CAM workflow in the traditional Rapid Prototyping process starts with the creation of geometric data, either as a 3D solid using a CAD workstation, or 2D slices using a scanning device. For RP this data must represent a valid geometric model; namely, one whose boundary surfaces enclose a finite volume, contain no holes exposing the interior,and do not fold back on themselves. In other words, the object must have an “inside.” The model is valid if for each point in 3D space the computer can determine uniquely whether that point lies inside, on, or outside the boundary surface of the model. CAD post-processors will approximate the application vendors’ internal CAD geometric forms (e.g., B-splines) with a simplified mathematical form, which in turn is expressed in a specified data format which is a common feature in Additive Manufacturing: STL (stereolithography) a de facto standard for transferring solid geometric models to SFF machines. To obtain the necessary motion control trajectories to drive the actual SFF, Rapid Prototyping, 3D Printing or Additive Manufacturing mechanism, the prepared geometric model is typically sliced into layers, and the slices are scanned into lines [producing a "2D drawing" used to generate trajectory as in CNC`s toolpath], mimicking in reverse the layer-to-layer physical building process.[2]