From Wikipedia, the free encyclopedia
Jump to navigationJump to search
This article is about testing fixtures. For other uses, see Fixture (disambiguation).

A test fixture is something used to consistently test some item, device, or piece of software. Test fixtures can be found when testing electronics, software and physical devices.

In testing electronic equipment such as circuit boards, electronic components, and chips, a test fixture is a device or setup designed to hold the device under test in place and allow it to be tested by being subjected to controlled electronic test signals. 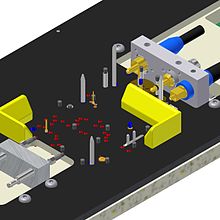 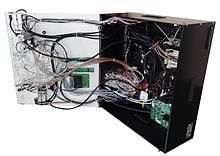 Examples are a bed of nails tester or SmartFixture.

A software test fixture sets up the system for the testing process by providing it with all the necessary code to initialize it, thereby satisfying whatever preconditions there may be.[1] An example could be loading up a database with known parameters from a customer site before running your test. The Ruby on Rails web framework uses YAML to initialize a database before running a test.[2] This allows for tests to be repeatable, which is one of the key features of an effective test framework.[1]

Test fixtures can be set up three different ways: in-line, delegate, and implicit.

The advantage of a test fixture is that it allows for tests to be repeatable since one is always starting with the same setup every time. Test fixtures also ease test code design by allowing the developer to separate methods into different functions and reuse each function for other tests. It also preconfigures tests into a known state at start instead of working with whatever was left from a previous test run. A disadvantage is that it could lead to duplication of test fixtures if using in-line setup.[1][3]

Software which is used to run reproducible tests systematically on a piece of software under test is known as a test harness; part of its job is to set up suitable test fixtures.

In generic xUnit, a test fixture is all the things that must be in place in order to run a test and expect a particular outcome.[4]

Frequently fixtures are created by handling setUp() and tearDown() events of the unit testing framework. In setUp() one would create the expected state for the test and intearDown() it would clean up what had been set up.

Four phases of a test:

In physical testing, a fixture is a device or apparatus to hold or support the test specimen during the test. The influence of test fixtures on test results is important and is an ongoing subject of research.[5]

Many test methods detail the requirements of test fixtures in the text of the document.[6][7]